The city of Meerbusch was foundet in 1970. The name of the city comes from the monastery „Prämonstratenserinnenkloster Meer“  Ruins of the monastery can be visited in the „Meerhof“ or so called „Haus Meer“.
You also should take a look at the 13th century church tower which is located in Meerbusch-Büderich. Today it is used as a memorial for war victims. The entrance portal and the hanging cross inside the church have been designed by the artist Joseph Beuys. Not only for people who want to get married the chapel Niederdonk (15th century), is it also a pilgrimage and marriage chapel.

A walk through the seat of nobility Dyckhof with its main building which attracts attention with its numerous gables and an enormous tower with several curved roofs, gives you interesting sights. You clearly recognize the characteristics of the baroque style which had been added during the construction in 1666.

A few more sightseeing points are the „Windmill in Osterath“ and the „Teloy mill“. One of the latest features is the Hospital of Therapy for motorik, language therapy in Merbusch-Osterath.

Location / development of the town:

The city is situated opposite the provincial capital of Düsseldorf’s exhibition fairground and airport, on the left-hand side of the river Rhine. The once independent boroughs of Büderich, llverich, Lank-Latum, Langst-Kierst, Nierst, Ossum-Bösinghoven, Osterath and Strümp make up the town’s districts today. The town was established in 1970 under the local government reform. Later on, Meerbusch successfully defended itself before the Land Constitution Court in Münster against the annexation attempts made by Düsseldorf and Krefeld.

The industrial estates in the districts of Strümp and Lank-Latum emerged in the 1960’s. These have been expanded up to the present day and new industrial estates have been built in Osterath. Numerous small and medium-sized companies now reside in Meerbusch. He has the second highest proportion of income millionaires in the resident population of North Rhine Westphalia.

The city of Meerbusch has around 55,000 thousand inhabitants (as at 12/2010) and covers an area of 64.4 square kilometres. The town is situated in the federal state of North Rhine Westphalia, administrative region of Düsseldorf, and belongs to the Rhine district of Neuss.

By road:
Meerbusch has links to the A52 (Roermond – Essen) A57 (Nimwegen – Cologne) and A44 (Lüttich Kassel) motorways.

The regional trains (RE7 from Rheine via Krefeld, Meerbusch, Neuss, Cologne and Münster to Rheine) and (RE10 from Kleve via Krefeld to Düsseldorf and back) stop at Meerbusch-Osterath railway station.

Meerbusch is approximately 18 kilometres away from Düsseldorf airport.

The U70, U74 and the U76 Lines of the „Rheinbahn“ connect the cities Düsseldorf and Krefeld via Meerbusch.

How to find our Guesthouse:

You will find more information about the way to us under the sub pages „Site Plan“ and „How to find us“ on our homepage.

Way to the Düsseldorf trade fair and the Merkur-Spielareana:

The Fair tickets and the tickets of the Merkur-Spielarena are not longer valid for transportation to go there by public transport from our Fair room. 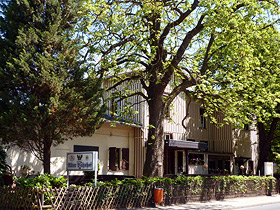 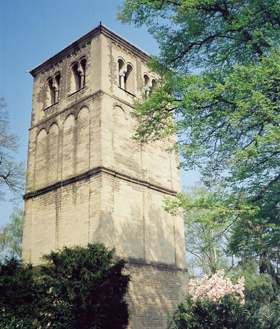 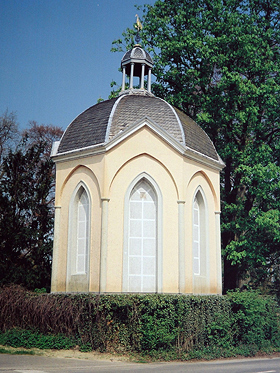 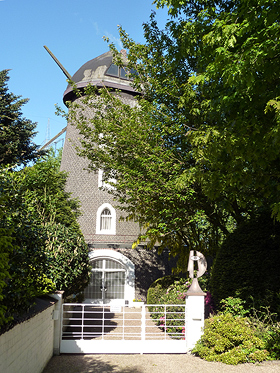 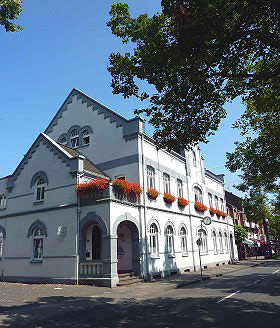